There is certainly a lot of misconception involved with the topic of tampa roof cleaning. Can you clean an asphalt shingle roof w/p pressure? Can you clean an asphalt shingle roof without harming the shingles? What are the black streaks on my roof? What will happen if I don’t get the roof cleaned? These are just a few of the questions this article will answer. Knowing this information can save you costly future roof replacements and added heating and cooling costs.In Tampa and many parts of CentralFlorida, roof algaee (Gloeocapsa Magma) is a growing problem. The algae thrives in warm humid climates like Tampa, usually first appearing on the north facing slopes of your roof where the right amount of shade and moisture are common. With the proper atmosphere this algae only needs one more element to survive and that’s food. Roof algae feeds on the crushed limestone that is used in the manufacturing of asphalt shingles. When shingles were first produced, manufacturers quickly realized they were too light and would not provide adequate protection, so they added crushed limestone to the asphalt to add weight and durability to the shingles.Gloeocapsa Magma is an airborne algae so it can land on any Florida roof with no rhyme or reason, though it does seem to be more prominent in areas holding a lot of trees. Once the roof algaee lands on the roof it will have to be killed and removed properly or it will continue to spread, it will never get better or just go away on its own. The algae begins feeding on the nutrients in the shingles, as it rains it is spread down the roof causing black streaks. If not taken care of it will take over the entire roof in a few short years turning the whole roof black. Besides looking very unsightly and diminishing any home’s curb appeal and value, what other damage can roof algae do? When roof algae are not taken care of they stop the shingles from reflecting heat from the sun’s UV rays. When this happens it can affect your home’s heating and cooling costs without you even realizing it. Also because the shingles cannot reflect heat they start to diminish prematurely. Signs of wear are curled corners, wavy or humped shingles, broke or loose shingles, and an excess of shingle granules appearing in your gutters just to name a few. Most home owners become concerned when the first unsightly black streaks begin to appear long before permanent damage is done. It’s at this point that most home owners will call a tampa roofing contractor and in my opinion it’s the point where home owners are steered in the wrong direction. It has been my experience from talking with many troubled home owners that most and I express the word “most” tampa roofing contractors are not going to tell the home owner that their roof only needs to be cleaned. Think about that for a moment, why would they? I have had many customers tell me that a tampa roofing contractor told them that the black streaks were water marks or a sign of wear in either case a roof replacement was recommended. Another scenario is that some tampa roofing contractors have no idea themselves what roof algae is and that it can be cleaned. Some will also combat losing a potential roof replacement job by telling the home owner that you can’t clean asphalt shingles without damaging them, which is completely untrue. None the less many home owners are suckered into a costly, premature roof replacement of a roof that only needed cleaned. If you think about it, it is no different than replacing your vinyl siding
because it has mold or mildew on it, no one would think of doing that.The good news is that asphalt shingles can be cleaned properly without harming the shingles, and the major shingle manufacturers say so themselves. They even have suggestions and guidelines for cleaning roof algae off of asphalt shingles without harming them. The proper methods include a no pressure chemical application followed by a light rinsing. NOTE: never use or allow a pressure washer
to be used on your roof. Inexperienced home owners and unethical contractors have damaged shingles by attempting to blast the algae off the shingles using high water pressure. Doing this blows the shingle granules off which are there to protect the shingles, thus lessening the longevity of the roof. In the past some have tried zinc strips on the peak of the roof which are supposed to release chemicals down the roof when it rains to help combat roof algaee. Most have reported poor results in Tampa with the strips. Recently shingle manufacturers have produced algae resistant shingles but there have been plenty of cases of roof algaee still invading such shingles. This is why they can only call them “algae resistant” and not algae proof. If you are battling with roof mold or know of someone else whom is, don’t lose hope and don’t replace that roof prematurely. First call a professional no pressure roof cleaning company in your area like Apple No Pressure Roof Cleaning at 813 655 8777 so that they can access the situation for you. Be sure that they use the chemicals and the low pressure methods that are recommended by the major shingle manufacturers. A proper no pressure roof cleaning can definitely save you money.
About the Author
Learn more about roof cleaning and proper roof maintenance from our friend Barry Maddox at Midwest Pro Wash or contact Shane Hester at WebFirstCreations to get your own construction website . 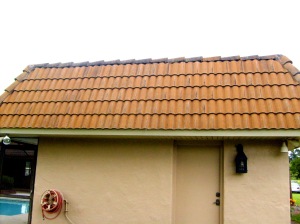 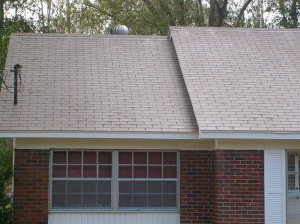 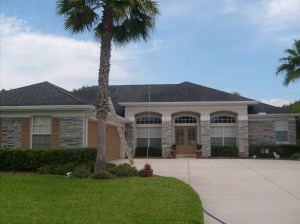 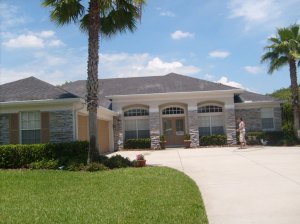 Roof stains in Tampa usually first appear on the northern-facing areas of a roof surface, as you’ve no doubt noticed. This is because these areas receive less sunlight in the Northern Hemisphere (it’s the other way around in the Southern Hemisphere, as roof cleaners in Australia could attest to). Sunlight aids in drying out the southern-facing slopes much more quickly after a rain, and since roof algae growth in Tampa is accelerated by moisture, you can see how sunlight plays a role. Direct UV rays from the sun also aid in retarding the growth of algae on these surfaces.

However, it’s important to understand that even though the sun helps to slow the growth of algae on southern-facing surfaces, it does not stop it. If you have stains beginning to develop on the northern-facing surfaces of your Tampa roof, it means that it’s just a matter of time before the entire roof is covered with algae stains. You might not yet see black stains on the southern-facing surfaces, but that doesn’t mean that algae hasn’t already taken root and begun to multiply in these areas.

That’s why it’s a good idea to have the whole roof surface cleaned, even though it may appear that stains are confined to one side of the roof. If you can see it somewhere on the roof, that means it’s everywhere on the roof. You can demand that your Tampa roof cleaning contractor only cleans the area where you can actually see black stains, but don’t be surprised when, 12 months later, that area is still clean but the rest of the roof is suddenly covered in now visible black algae.

Article written by our friends at Roof Cleaning Chemicals

Origin of the Roof Stains on your Tampa Roof:
Cyano bacteria has existed on earth for millions of years. Bacteria spores are carried by wind, birds, squirrels, etc. The roof stains are caused by the airborne spores from blue / green algae (Cyano Bacteria). These roof raiders land on your roof shingles and feed on the limestone base of the asphalt shingles. The fungus, mold and mildew grow on the roof algae, as they require organic food (the algae) to survive.

Survival – Prior to 1978, cyano bacteria would starve to death when it landed on your Tampa roof:
After 1978 limestone was added to asphalt shingles, and limestone is a favorite food for algae, properly called cyano bacteria gloeocapsa.
So when the wind and birds spread algae to your Tampa roof, it thrives on your roof by eating it!

Roof Stains: Rapid Spread in Tampa
As the roof algae grows, it holds moisture allowing the growth to accelerate.
Thus the roof streaks and stains spread wider and darker over time.
The spread of roof algae, mold, mildew and associated roof fungus extends throughout the country.
Originally believed to be primarily a Florida issue, the spores have been found to survive in some of the harshest climates.
Even shingle manufacturers have indicated that 80 percent of the asphalt shingle roofs in the United States are streaked or showing signs of being affected.
An estimated 40 percent of shingle roofs in Michigan, have an shingle algae problem.
Extreme temperatures won’t prevent the roof streaks spread, extreme heat or cold make them dormant until more favorable weather returns.

Tampa Roof Stains: What to do?
At the first sign of roof algae/fungus streaks, it makes good sense to clean your Tampa roof! Here’s why: As the roof algae and fungus grow on your Tampa roof, they eat away the base of the shingle and expand and contract with the outside temperature. This growth and movement loosens the granules, creating premature granule loss, dramatically shortening the life of your roof. A 25-year roof may not even last 15 years in Tampa if nothing is done. Failure to remove the roof algae will raise roof temperatures by preventing the reflective capabilities of the granules from doing their job. These temperatures make your air conditioner work a lot harder and increase your Tampa Electric bills sometimes as much as several hundred dollars a year.